Economics of Reuse -- the ULA Vulcan vs the SpaceX Falcon 9

Before getting into the meat of this post... I should note that this blog is not generally about spacecraft. Normally it contains posts related to Oracle certification. As it happens, I am also very interested in space, and the current drive for reusable space launch systems. In this instance, my blog is just a reasonably convenient place to post an analysis I created about the United Launch Alliance (ULA) Vulcan and the SpaceX Falcon 9. If you are a space enthusiast... don't bother bookmarking this blog... it will seldom be about space. If you're an Oracle certification candidate, ignore this post... unless you also happen to be interested space launch vehicles.

Because of my interest in reusable launch systems, I have followed the activities of SpaceX closely for a number of years. By the same token, I also follow Blue Origin... although I'll be much more interested in them once they make the move beyond sub-orbital boosters. When ULA announced that their proposed Vulcan launch vehicle would be partially reusable, I was (briefly) interested in it -- although one look at their proposal damped much of my enthusiasm. The convoluted plan that ULA devised in order to reuse just the engines of the Vulcan first stage seems to involve a significant design effort for a minimal return. At best it is an evolutionary step in reusable launch technology when both SpaceX and Blue Origin are working towards revolutionary steps. 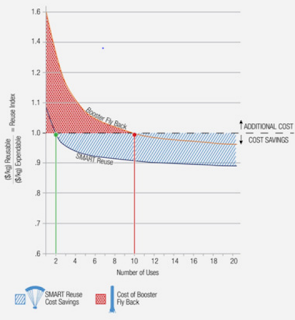 A few days ago, an article I read reminded me of the Vulcan and prompted me to check if there was any recent news about it. While searching, I ran across a white paper from ULA: Launch Vehicle Recovery and Reuse. The paper is an interesting read -- in particular the analysis used to sell the notion that the Vulcan Sensible Modular Autonomous Return Technology (SMART) plan makes economic sense.  The chart to the left comes from  section 7 of that document: Economics of Reuse. In this section, the authors explain why SMART would be more effective at reducing launch costs than the booster flyback concept of SpaceX. According to the paper, the chart demonstrates that SMART will reach break even when compared to a comparable expendable booster at the second launch and subsequent reuses would drop costs to about 90% of an equivalent expendable booster.  By contrast, it purports to show that the Falcon 9 flyback concept does not break even until the tenth use and never matches the cost reduction of the SMART concept.

The formula that ULA used to generate the graph is shown in the image below. Unfortunately, while the white paper notes that the accuracy of the information generated by the formula is highly dependent on the values used in it, the paper does not actually provide the specific numbers used to generate the chart. The readers are presumably intended to accept that the authors chose reasonable values. 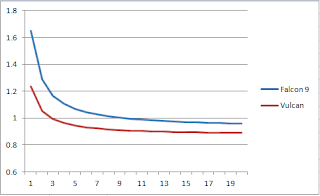 Since I don't like making assumptions, I created a spreadsheet that contained the above formula along with cells for entering the relevant parameters for both the Vulcan and the Falcon 9. While I had to estimate values for both vehicles using data available online from SpaceX and ULA, I was able to tweak the results until I came up with a result that matches the ULA white paper reasonably well (chart to the right).  It is a given that I do not have the exact numbers they used in the white paper (especially since the Vulcan exists only on paper). However, I am reasonably confident that my numbers are not ridiculously far from what the ULA authors used. As with the ULA results, the Falcon starts with a reuse index of about 1.6. (which indicates the launch of an Falcon 9 that performs a first stage flyback costs 60% more than that of an expendable booster with the same performance). The F9 breaks even at ten uses, and never gets better than about 5% lower in cost than an expendable booster. By contrast, the SMART tech breaks even at the second use and rapidly drops to about 89% the cost of an expendable booster.

One thing soon became apparent as I was tweaking the equation inputs. The variable which far and away made the most difference in how rapidly the break even point was achieved as well as the overall economic viability of the two concepts was p. This is the ratio of the performance of the expendable system to the performance of the reusable system. To see the true elegance of this coefficient (from ULA's point of view), it is necessary to understand the effect it has in the equation. If the rated mass-to-orbit of a fully expendable launch vehicle is 30% greater than the rated mass-to-orbit of an equivalent launch vehicle with reusable features, then the function increases the reusable mission cost by 30%. The paper even states that this is the primary reason for the 'cost difference' in the two concepts: 'The difference is mainly because of the 30 per cent performance loss to land the booster downrange on a barge.'

While I'm certain that viewpoint is an attractive one to the ULA team behind the SMART concept, it does not mesh with reality. The Falcon 9 missions seldom make use of 100% of their rated capacity. If an expendable booster only uses 70% of its rated capacity to launch a given payload into its designated orbit, the costs for the launch are not reduced by 30%. By the same token, launch costs would not increase by 30% if an equivalent reusable launch vehicle required its full rated capacity for the same payload. It is true that there are additional performance-related mission costs for a flyback mission when compared to one with an expendable first stage -- notably additional propellant. However, Elon Musk has indicated that propellant costs are less than half a percent of the total mission costs. In any event, the cost of that additional propellant should be included in the C(RR) variable of the equation. Arbitrarily increasing the mission cost because the reusable tech decreases the maximum potential mass-to-orbit is madness. For that matter -- it makes no more sense when applied to SMART than it does for the flyback option of SpaceX. However, it favors the SMART concept because the additional mass required for the parachutes, inflatable decelerator, and engine separation mechanism has a lower impact on the total mass-to-orbit than the flyback option.

I can accept the reduced mass-to-orbit capacity caused by adding reusability features to a launch system having a tangible cost impact if it were to put a payload outside the rated capacity of the launch vehicle. This could require the payload to be launched on a larger (and more expensive) booster. Of course this would require mission planners to blindly decide that since the Falcon 9 cannot launch the payload to the required orbit and accept the performance penalty of the first stage flyback -- that the mission would simply have to be launched using the F9-heavy at a higher cost. The logical flaw in this thinking is obvious. Nothing says that SpaceX cannot simply launch such a payload without recovering the first stage. A mission like this might well make use of a first stage that has been used on several previous flights and is approaching the point where it is not feasible to refurbish. 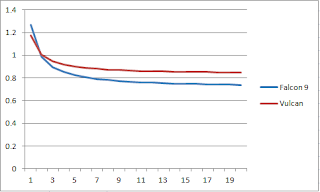 The ULA equation looks fairly reasonable... minus that one variable.  Once p is removed from the equation -- the same values that generated my first chart above return the results in the chart to the left. Using this logic -- both options reach parity with an expendable booster on the second use. Additional reuses show the flyback option to save more money than SMART. Even then -- I'm confident that the numbers I chose in order to make the first chart results match the one in the white paper are using values that artificially inflate SpaceX's costs. Elon has indicated that he expects F9 missions using reused boosters to be priced at about two-thirds the cost of one with a new booster. Even after twenty reuses, the index with the values I used show a cost of 74% that of an expendable mission. When I put in values that make more sense to me based on the Falcon 9 launch price figures posted by SpaceX, I get results much closer to Elon's prediction. However, those figures cause the first chart to be very different from the white paper.

I may well be maligning the authors of the ULA white paper. However, it strikes me that someone who was putting together an equation like this might well have initially developed one that did not contain the performance ratio. After populating the equation, it would have quickly become obvious that even using unfavorable assumptions for SpaceX production and refurbishment costs, there was no way for the formula to make SMART look like a competitive solution. A person in this situation might well have decided that the formula needed a coefficient which would heavily favor SMART. For maximum effectiveness, such a coefficient would need to be a single value that acted as a multiplier on the rest of the equation. The p variable is exactly what was needed in exactly the right place. That seems overly convenient to me.

Anyone who is interested in playing around with the analysis is welcome to the spreadsheet I created. The first tab contains the analysis using my best guess at the ULA numbers.  In the second tab, I changed the SpaceX numbers to match values I believe are closer to reality.
Posted by Unknown at 10:51 PM