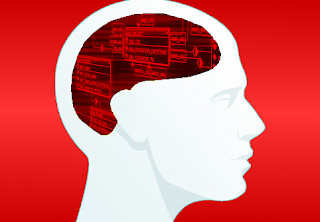 Four years ago I published the first of the Oracle Certification Prep study guides -- largely because I felt that Oracle certification candidates did not have enough options in their choice of study materials. There is a tiny fraction of the myriad options that are available for certification exams from Cisco, CompTIA, or Microsoft.

Last year I started making practice tests available for the same reason. Prior to this, there were only two vendors of practice tests that offer a high-quality product, and since both are owned by the same company, they are effectively one option.

I spend a lot (too much) of my time thinking about Oracle certifications. A fair amount of that time is focused on trying to devise ways of providing certification candidates with more options to prepare for their exams. Late last year one came to me and I have been working on it ever since.

Long before I started writing study guides for others, I was creating 'study notes' for my own use in passing certification exams. These notes were basically just three to five pages of important facts, lists, commands, etc. that I felt were likely to be asked about on the exam. As part of my study process, I would read through them multiple times, On the day of the exam. I would arrive at the testing center early enough that I could spend fifteen to twenty minutes going through the notes a final time. This ensured that a fair amount of the information that I would be encountering on the exam was fresh in my short-term memory.

Several times in the past four years I have tried to think of a format to reproduce the utility of these study notes for others. Until now, I have been unable to come up with a reasonable delivery method and a way to provide context. The notes were really just brief and cryptic 'answers' to questions I did not bother to write down. They would have been useless for anyone but myself. In December I had an epiphany about a solution to both problems. The level of information that I put into the study notes is a very good fit for the 'answer' portion of flash cards. The 'question' component of flash cards would provide context and a mobile app would make an ideal delivery system.

I liked the idea so much that I dropped everything in order to focus on the task of turning the concept into reality. It worked -- the first two OCPFlash apps are now available on Amazon. Each contains 200 flash cards for the 1Z0-061 and 1Z0-051 Oracle SQL Fundamentals exams respectively. In a few weeks when more apps are completed, they will all be released on the Google Play store as well as an iOS version at the Apple store. Currently the focus is on developing new flash cards as rapidly as possible. Flash card apps for more exams will be released as I have time to create the content for them. Eventually I plan to release OCPFlash for all of the exams that I have written practice tests for.

To be clear, I highly recommend that certification candidates should NOT attempt to use the flash cards as their sole source for exam preparation. There is absolutely no way that all of the information required for any certification exam could be represented in flash cards. On the SQL Fundamentals apps, for example, the SQL statements used are considerably smaller than what candidates will see on the real exam. There is simply not enough room on a flash card for it to be otherwise. In addition, while flash cards are an effective way to assist with the memorization of facts, they are no help at all in other areas -- for example gaining experience writing and executing SQL. The image below shows an example of a question and answer set for the SQL Fundamentals exam. 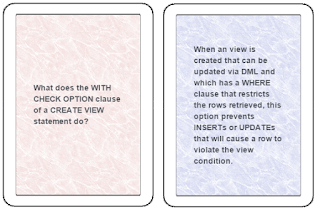 The flashcard app is $1.99 on Amazon. My vision of the role it would play in a certification candidate's preparation would be as an additional resource beyond whatever study materials they are already using. I believe that most people who use them will get a number of exam questions correct that they would have missed otherwise. If the app helps someone to answer even five or six more questions correct... in my opinion that is an excellent return on an investment of two bucks.
Posted by Unknown at 11:20 AM